Black Widow has been confirmed through leaked set images of both Black Widow aka Natasha Romanoff (played by Scarlett Johansson) and an unknown actor playing, who we assume, is Marvel villain: Taskmaster – though it’s yet to be confirmed whether this film will be a prequel (which wouldn’t make a whole lot of sense) or whether this is somehow a sequel to the events of Avengers: Endgame.

As fans will know, Black Widow sacrificed herself to obtain the soul stone and died in 2014 when Natasha, Clint aka Hawkeye, Nebula and Rhodey aka War Machine travelled back in time to obtain both the soul and power stones.

Fans theorise that because a living soul is exchanged for the soul stone, itself – it should (in theory) mean the stone can be exchanged for the soul that released it in the first place – meaning at the end of Endgame when Steve Rogers aka Captain America returned to the various time periods to place the infinity stones in their respective time lines, Natasha would have been brought back to life when Steve returned the soul stone to Red Skull on Vormir, which would of been very cool to see!

It is, however, unclear as to whether Natasha would then live her life in this alternative reality where Thanos, Nebula, the Black Order and their armies are no more, and in a world where (in theory) the Guardians of the Galaxy would never form – not to mention a universe filled with other alternative events. But we’ll save that conversation for another time…no pun intended….

Back to the main topic!

This weekends San Diego Comic-Con is bound to get fans talking as Marvel’s highly anticipated Hall H panel is expected to announce the future plans for the MCU – which may include the above mentioned movies, plus some we are yet to know about!

Disney have slated Marvel release dates up until July 2022 – with two films slated for next year (2020) alone! A further six films will follow with three films slated for 2021 and 2022 respectively.

Following the events of Avengers: Endgame and the shocking mid-credits scenes of Spider-Man: Far From Home where the world learnt of Spidey’s secret identity and that the real Nick Fury is off world – presumably building S.W.O.RD. Marvel fan’s everywhere have been left pondering as to what is next! 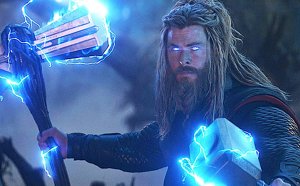 Clearly Taika Waititi’s formula for Thor: Ragnorok worked wonders making it one of Marvels most highly rated films – adored by fans and critics alike – so it would make sense for Disney to cash in on the God of Thunder for at least one more adventure – at the very least to conclude his long story arc, where he may at last find some belonging in the universe, once and for all.

It would be safe to assume that his story would go cosmic again too. This would serve as a possible introduction for other cosmic characters such as Beta Ray Bill, who in the comics, wields Stormbreaker. Nova, of the now destroyed (in the MCU) Xandar and the Nova Empire (presumably), and other big names such as the Silver Surfer and Galactus; seeing as these two characters have been reacquired from FOX and handed back to Disney/Marvel.

Just as Spider-Man: Far From Home concluded the Infinity Saga and presented so many questions going into the next saga – having a character such as Thor start the phase 4 story arc – which in turn could lend itself to the mythological story of The Eternals, the return of Carol Danvers aka Captain Marvel, the introduction of Adam Strange (teased in one of the post credit sequences in Guardians of the Galaxy Vol.2) and the slow introduction of a lingering ‘big bad’ such as Galactus or perhaps a build up to the Secret Invasion event which saw multiple heroes replaced in the Marvel universe, by Skrull agents.

After all, Nick Fury (who was actually the Skrull: Talos, all along) warned Peter Parker (in Spider-Man: Far From Home) not to invoke Captain Marvel’s name, so some bad blood may have developed between the newest Avenger and the Skrull leader after their adventure back in the 90’s?

Once thing that we know for sure – and that Spider-Man: Far From Home did so well was that the earth is currently heroless. The events of Avengers: Endgame has left the world wondering who the next generation of heroes will be, seeing as (apart from Spider-Man) they have all gone quiet…even our friendly neighbourhood web-head was reluctant to play the hero for the majority of his latest adventure! so it would seem that Marvel is teasing fans about this next generation of heroes and who will step up to defend the earth, if and when the time comes. But with the world completely aware of powered beings, threats for space and who knows what else – Marvel will have to take things to a new level to keep the millions of Marvel fans out there glued to their screens! And if Spider-Man: Far From Home is an example of the twist and turns that are to come…then I think we can rest easy that we’re going to be entertained for some years to come!