We reported last week that we weren’t all that looking forward to Star Wars IX, but we are now!

There was also footage shown from the eagerly anticipated first live action Star Wars series: The Madalorian. Although the streamed footage was halted during the live panel at the point of showcasing said footage – as usual fans who attended the panel managed to record it and put the footage on Youtube…and we saw it…and it looks amazing!!

Lucasfilm president, Kathleen Kennedy, also revealed that talks are now underway about adapting the critically acclaimed Knights of the Old Republic video game. Though this probably won’t directly adapt the story, it will faithfully take inspiration from the source material and it is yet unclear as to whether this would be a TV series or movie for the Disney+ streaming service

Star Wars: The Rise of Skywalker

Last Friday, we, like many others out there streamed the Episode IX panel live. We got to hear some interesting details of when the story is taking place and that for the first time in the trilogy, all of the next generation heroes will be going on an adventure together.

Obviously the actors on stage weren’t allowed to give away too much, with both J.J. Abrams and Kathleen Kennedy keeping a close ear on the casts responses on stage next to them. Cut to the end of the panel and the eagerly awaited trailer was shown live at both the event and online.

As HUGE Star Wars fans, we were nervous because the current trilogy has yet to pull out anything big. No huge battle scenes, no big reveals – nothing. So when we started to watch the new trailer (above) we were like “Okay, Ray can force jump, that’s cool. Presumably a force ghost Luke is narrating the trailer about legacy, we get that. Leia’s theme is playing, nice touch. Emotional reveal of Leia and quick shot of the return of Lando. So far so good, but no real excitement” But then the last shot of the remains of the Death Star and then Palpatine’s laugh…things just got interesting!!!!

For the first time in this trilogy things seem to have taken a very exciting turn and that’s great, but at the same time it’s quite sad. Should we have waited 5 years for such a big reveal and for something to REALLY grab our attention?

Listening to a couple of interviews with Kathleen Kennedy, it seems that both Disney and Lucasfilm are learning from past mistakes (which is great) and they have now come to realise that Star Wars is something that needs to be built up and for fans to really get excited about. Disney have learnt the hard way that they can’t pull a MCU with such cinematic universe.

Cue the title reveal “Star Wars: The Rise of Skywalker“…

The questions on everyone’s lips is “Which Skywalker?” does this mean we might see Luke return? Is Rey actually a Skywalker? Will Ben Solo finally turn back to the light side?

If we were to venture a guess, then we doubt it would be Rey. Though fans assumed that “The Last Jedi” meant Luke, this in fact meant Rey. Would they go two for two and just drop the ending into the title again? we would guess not as this is to obvious a plot and Luke probably would have recognised her in some form or another. We also doubt that Rey is Ben’s sister as this is just way boring and plays right back into the original trilogy – which has been one of the many criticisms of the recent Star Wars trilogy.

If we’re being optimistic, we would guess that we could see a return of Anakin. After all, the Skywalker saga has always been about him and his journey from light to dark and then back to the light again. If the Emperor is indeed back and has been biding his time or has been the mastermind behind the First Order this entire time, then Anakin could possibly seek to rectify that.

Ben as been trying to communicate with Anakin (we assume) and even has is burnt Vader helmet from Endor. Clearly Ben thinks that Vader was an all powerful Sith (which technically he was) but he obviously doesn’t understand the full story of Anakin’s past as was in essence, a slave to Palpatine.

If we were to guess even further, then the quest the Rebels are on could be to find certain artefacts from Anakin’s past. We see a desert planet which could be Tatoonie, we’ve seen a couple of forest settings which could either be the forest moon of Endor or even Yavin IV and then the final shot of the ruins of the Death Star – we’re guessing the second one – could have crash landed on one of the other nine moons of Endor.

For Anakin to come back in some form and to try and save Ben from making the same mistakes as he did would certainly be a fitting end to the saga.

Returning to Rey’s parentage – another theory is that Rey is a descendant of Palpatine. Though a twist it may be, again it would fall into “I am father” territory.

It’s doubtful that we will see any further footage until late summer/Autumn. Until then – no doubt the internet will be ablaze with fan theories.

When Disney took over Lucasfilm, Clone Wars was one of the unfortunate casualties of the huge merger. Instead, Disney launched Star Wars: Rebels and although it was a sequel series to the critically acclaimed Clone Wars, fans still had that special place in their hearts and yearned for an official conclusion to the adventures of the republic heroes.

At San Diego Comic-Con 2018 fans got their wish and a surprise announcement was made which shook up the world of Star Wars fandom. Clone Wars was back!

Last week, we were treated to the second trailer of the highly anticipated and award winning animated series. Check out the trailer above.

We’ve known for a while now that EA were working on a new single player Star Wars game. Fans were (well at least we were) hoping for a single plater RPG, something that the franchise is really missing at the moment. With the quality of next generation graphics and RPG’s moving leaps and bounds, it would have been a perfect time for us to really delve into a good role playing game set in the galaxy far, far, away.

Though the EA and Respawn trailer looks interesting – a young Jedi in hiding after the events of order 66 – and what we now know will be a similar format to The Force Unleashed series, we can’t help but think they’ve missed what could have really been a different and interesting RPG experience. Playing a Jedi in hiding in an open world, picking an choosing your moments to use your powers knowing that you could attract attention could have really made for a unique gaming experience within the Star Wars lore.

What’s more fascinating is that they have chosen to opt for yet another male protagonist, where as a mutli-choice gender option would have been much better, in our opinion at least.

Unfortunately this is something we are just not excited about and another Jedi “slasher” game is not something the franchise could use right now. Star Wars has seen a lot of success over the recent years with expanding the lore to include non-Jedi characters. This is something they should have capitalised on, again, in our opinion. 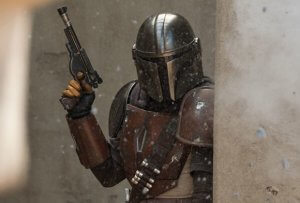 This series has us really excited!!

Set five years after Return of the Jedi, the galaxy will be in a state of transition. The Empire is disappearing and the New Republic is taking control. This is going to be something very different in world of Star Wars and it’s a genre that Clone Wars did very well. It expanded the universe and followed characters who were new, non-Jedi, non-Republic and were normal citizens in the galaxy who were trying to get by. Whether these were bounty hunters, soldiers, diplomats from new words and even civilians.

This series has the scope to truly build on a new set of character, much like Rogue One did! And from the footage we saw online, it looks like they are doing something really new with the franchise whilst keeping true to the lore.

To see the The Madalorian panel from last week, watch the video below: