The build-up for San Diego Comic-Con 2019  is well under way!

Spider-Man: Far From Home is dropping A LOT of jaws with it’s astonishing mid and end-credits sequences respectively, so Marvel’s impeding phase 4 announcement at next weeks comic-con is by far one of the most talked about topics in pop culture at the moment.

BUT, Marvel won’t be the only big franchise there this year! CBS is bringing The Star Trek Universe to San Diego Comic-Con!

The Star Trek Universe panel will explore over 50 years of Star Trek – showcasing the Star Trek: Discovery cast and no doubt a teaser for the mysterious season 3 set 950 years in the future. The very interesting sounding Star Trek: Lower Decks, which is an adult, animated comedy set around the none senior, “less important” crew members we would usually see in the background of the bridge or engineering whilst the likes of the captain and his/her senior officers deal with a crisis.

Last but not least is the very eagerly anticipated Star Trek: Picard which is bound to get the trekies attending comic-con very excited! Now, CBS has released a new poster ahead of next weeks covention which reveals the first official, complete look of Admiral Picard at his family vineyard in France. 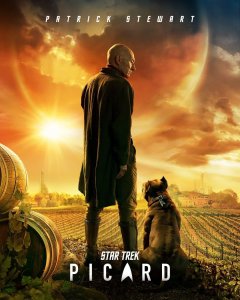 Next to Picard we see a new companion which is also nice personal nod to Sir. Patrick Stewart’s love for adopting pit bulls. But if you look closely at the dogs name tag, a classic Starfleet delta, we see the dogs name is ‘Number 1’. This, of course, refers to Captain. Picard’s right hand man and close friend for many years, Commander. William Riker – later promoted to Captain. Riker and played by actor/director Jonathan Frakes.

Could Riker have been killed between the events of Star Trek: Nemesis and Star Trek: Picard?

We are assuming that the planet in the sky above the vineyard represents Romulus, which was destroyed in 2387 by a supernova – which Spock (prime universe version) told James Kirk in 2009’s Star Trek – set in the alternative, Kelvin timeline.

We already know based on the Star Trek: Picard teaser trailer (released earlier this year) that Picard lead the biggest rescue armada in history, which again, we assume, refers to the evacuation of Romulus before it was ultimately destroyed. Clearly the events that took place during the evacuation affected Picard so much that it ultimately lead him to leave Starfleet.

Again, presuming events, it would make sense that he lost a lot of close friends during the mission. No doubt the Enterprise-E was on hand as was the Titan (Riker’s ship) to help with the rescue efforts. If one or both ships were lost, most of his friends would have been on board either one of the ships. Naming his dog ‘Number 1’ would be a way of having his trusted friend with him by his side, in spirit.

However this is just speculation at the moment, but as we know from the Star Trek: The Next Generation episode ‘Family’. Picard returns home to earth in a time of crisis and retreats to his family vineyard to stay with he brother after suffering with PTSD – after his assimilation into the Borg Collective and the subsequent battle of Wolf 359 – which he felt responsible for.

If Picard once again feels responsible for events which were literally out of his hands, it would certainly lend itself the characters personality and his endeavour to always persevere life. Thanks to the casting call and supporting character bios: we know that one of Picard’s new crew members, on his yet unknown mission, is an expert in positronic brains. If Picard feels responsible for the loss of his friends and former crew-mates – if he learns Data is still somehow alive after the events of  Star Trek: Nemesis it would make sense that, Picard, wouldn’t want another friend to be left behind.