Little is known about the upcoming final instalment of the Skywalker Saga.

There have been little bits of “leaked” promotional art showcasing mostly character sheets but this is the first time we have got to see some potential SPOILERS, so view at your own risk! Please note we also discuss SPOILERS from previous Star Wars films below! 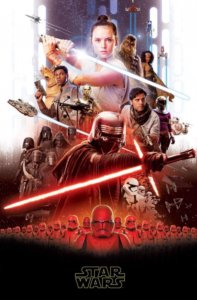 First of all, general consensus of this “leaked” artwork is that this a merchandising poster and not a theatrical poster i.e. something you would find at a supermarket. The style certainly fits that look rather than something that is actively trying to promote the movie.

With regards to “potential” spoilers we have listed these below:

Kylo Ren: First of all Ben Solo has fixed his mask – the cracks seemingly visible in red – perhaps some sort of strange adhesive or energy?

Rey: We are assuming, at this point, that Rey has fixed the infamous Skywalker lightsaber, however she could have potentially built a new one, or at least, salvaged some parts after the weapon was split in half in The Last Jedi. Her outfit looks like she’s embracing her Jedi side – wearing full white whilst still having elements of her original Jakku gear.

This is actually quite reminiscent of Princess Leia’s white outfit from A New Hope and Senator Amidala’s Geonosis outfit from Attack of the Clones.

Knights of Ren: It looks like we may finally get to see the mysterious Knights of Ren in Episode IX. The group lead by Ben Solo, made their first brief appearance in The Force Awakens. Fan’s were hoping to see more of them in The Last Jedi and further understand the still allusive origins of The First Order, Snoke and how the Knights of Ren came to be. However, this never came to be so we hope to finally see this story pan out.

Red Stormtroopers: The red theme was ever present in The Last Jedi and with the Praetorian Guards (Snoke’s personal guard) now dead, it would make sense if Kylo Ren has created a new elite unit or is in the process of making radical changes to the First Order. However, we do also see the standard white Stormtroopers on the right.

Ships: Right in the background, we see the return of the X-Wing, A-Wing and the first appearance of the Y-Wing, in the new trilogy. We also see what seems to be a new class of Tie Fighter as well (Right). The Millennium Falcon also has it’s dish back after losing it (Again) during the Battle of Crait.

New Characters: The new character, Jannah, is pictured in the top right and behind Chewbacca and Zorri is the character pictured with the helmet, behind Poe Dameron. We can also see a new alien next to Finn and a new droid alongside BB-8.

C3-PO: This one is confusing…C3-PO is wielding Chewbacca’s sash and bowcaster?? So unless Chewie unfortunately dies early on in the film or that the Rebellion is arming literally everyone – this is one to watch! What is also notable is that the trusty astro-mech: R2-D2 is nowhere to be seen? Could R2 be a casualty in Episode IX? Could the loss of his lifelong friend convince Threepio to take up arms?

The infamous droid pair have had little screen time in the new trilogy, thus far, but as this is the final chapter in the Skywalker saga and given their deep routes with the family, we hope that they get the send off they deserve.

General Leia and Lando Carlrissian: Most notably, both Leia and Lando are not on the poster? How their respective roles will play out – we have no idea but we’re lead to believe that unused footage from The Force Awakens will be used to say goodby to the legendary princess, at least.

The annual Star Wars Celebration is next month so we expect to see the first official footage an theatrical poster released in a couple of weeks time.